Happy Holidays! This week we will be working on two of the most difficult variations in No. 33, and then continue with more variations involving those “notorious” dotted rhythms.

These two variations are perhaps the trickiest on this page of Feuillard No. 33. As I explained to Iestyn in the video, the problem is that the pattern here is in groups of three notes superimposed over a theme which is organized in groups of four notes. As a result, the interplay between these rhythmical units can trick the brain. There are several ways to work this out. Some students actually end up writing the bowings on the music – but it is much better to feel the groupings of the notes. A good technique for feeling the groupings is to focus on just the single note, which is a down-bow in #21 or an up-bow in #22.

I also like for the students to recognize that when they are practicing these bowings they are practicing for passages in real literature that they will be playing in the future. In this case, I pointed out the last part of the Paganini Moses Variations.  There is also a passage in the beginning of the first movement of the Dvorak concerto which has a similar bowing pattern and often sounds like triplets, though it is written as sixteenth notes.

We first worked on dotted-rhythms in Feuillard No. 32. Mr. Feuillard introduces dotted rhythms right in the beginning of No. 32, in Variation #8. Then he presents them again later in Variations #18-21 in order to give the students a chance to dig deeper in their understanding of these difficult rhythms. Dotted rhythms are notorious for string players, and they are often played very sloppily. Now with Feuillard No. 33 Variations #23-30 we hope to refine our ability to play these rhythms even more. I like the way that Feuillard gives some time and space between the presentations of these issues, so that students have a chance to understand and absorb the issues before refining them further.

Iestyn had not formally studied the distinction between these dotted rhythms yet, but we had addressed it briefly in an early etude that we had done (Dotzauer #16). I like working on that etude with students because it deals with a big core sound (Maestoso), left-right motion, and becoming aware of details in the text – in this case the difference between the two types of dotted rhythms. I do almost all the etudes in Dotzuaer Book 1, and Iestyn has just finished that book and is starting Lee Melodic Etudes, Book 1. But he forgot that we had touched on this issue several months ago when he started studying with me.

I also spoke with Iestyn again about the height of his left elbow on the lower strings. I have talked about this a good bit in the past, but it has still not stuck with him (see Blog 13!). That happens all the time with students. I discuss some technical issue – but it doesn’t actually get solved.  I have to keep bringing it up again and again.  Finally it sinks in and becomes a habit.  Sometimes it just means describing the issue in a different way, with a different metaphor, or using a different exercise. But often it means just harping on it and not letting the students get away with less than your expectations for them. Sometimes I think that a teacher has to be a bit of a “control freak” by insisting on students making the corrections, especially when certain wrong physical motions are already ingrained. Otherwise they will not make the changes that are necessary. I hope that this time Iestyn will get the point about the arm height, but only time – and next week’s lesson will tell if he has truly absorbed the concept!

While Variations #23 and #24 feature legato dotted rhythms, Variations #25 and #26 call for the staccato dotted rhythm. I reminded Iestyn here about the “relax” exercise that we had discussed earlier in No. 32 (see Blog #9 in this series). It is vitally important to release tension while playing, and especially necessary in dotted rhythms.  Variation #26 throws bow distribution into the mix, with the goal of producing the same sound with the same amount of bow at the frog and at the tip. For the dotted rhythm stroke at the tip we need to focus on the down-bow, which has the “energy” in the stroke and which brings us back to the tip each time.

Sometime around this point in the student’s development I like to introduce some bow coordination exercises outside of Feuillard. The following is a set of coordination exercises that work on down-bows and up-bows at the frog and tip, along with left-right motion. The goal is to get the same sound with the same amount of bow at each end of the stick, and to coordinate that with the large left-right motion body movement. 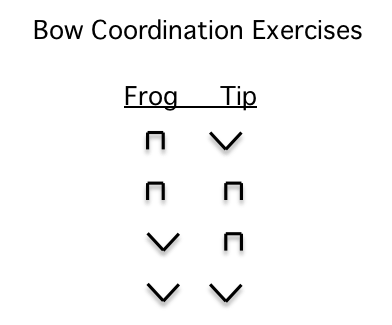 These exercises are a bit tricky at first. Finding the right choreography for the left-right motion is an important part of the coordination issues here. I showed this exercise to Iestyn and he picked it up quite quickly. I then asked him to live with it for a week and do a G-scale using these exercises in the following lesson to make sure that they were ingrained in his body and brain.

These exercises are also really good for making sure that the bow angles are correct at the frog and tip. I had to remind Iestyn to “bow out” at the tip several times. Working on getting a good bow angle (parallel to the bridge, or perpendicular to the strings) is a constant process. It was one of the first things I addressed with Iestyn when he started working with me, as with all students. But it is something that needs periodic reminders – otherwise we get sloppy and the bow angle becomes incorrect. Even very advanced players need reminders – and I am constantly checking my own bow angle, using a mirror or in videos. The reason that this is such a problem is that our arms swing naturally from the shoulder joint in a circular direction around our bodies. But in order to have a “straight” bow we need to bow away from our bodies.

In next week’s blog we will continue our work on dotted rhythms, and finish up Feuillard No. 33 with more sautillé and up-bow staccato exercises.